Skip to content
Home / Uncategorized / A Rescue By USS Ashland

USS Ashland is the name of the vessel that rescued recently a vessel that had been lost at sea for months. The sailors were brave and had to face squalls and sharks while they were at sea till they were finally rescued and brought back to land. The boat that was damaged by storms and drifted lost in the oceans for five months, was brought to shore by a US Navy ship at the White Beach Naval Facility which is in Okinawa in Japan. 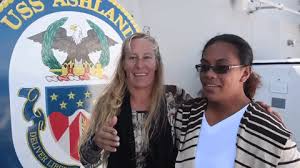 The sailors put their feet on land this Monday after they have spent nearly a year lost at sea. This journey of the two amateur sailors is an amazing one and one whose details are still being unfurled; amateur sailors, two women aboard the vessel, had set sail in Hawaii on May 3rd. As per their accounts, they were caught in violent squalls soon after and that damaged their boat, impaired all their communication devices and the mast of the vessel. The boat was also damaged by sharks. The two women, out of whom one was a novice in sailing, were aboard the vessel with two pet dogs. They had dry food with them as well as the facility to create drinking water.

An emergency beacon that was registered and working was found on the boat and it is possible that it was not noticed by the women on board. Their boat was discovered by a Taiwanese fishing vessel but they claim that the boat tried to tow them which was damaging their boat further. At such a time a mayday distress signal was sent out which was caught by USS Ashland. The women stated that they had been planning the journey for months and they had taken enough of the supplies. Even if they faced distressing conditions they had enough of the supplies.